Spring 2011. Here I am again with Esquisse in our favorite attic. She’s plump and relaxed, dozing in her basket. And me – I’m anxious and on the look-out, pretending to read while I keep an eye on her belly.
Sixty-fifth day, off of work, today’s the day, spread the news !
After some excruciatingly calm hours, Mum-cat suddenly begins bustling around the room, looking concerned, and settles in her delivery box – the one she completely ignored until now. Seastorm in the belly : Huge waves hurl under the fur – expulsion contractions ! Forget about the book, get the gear together, ready to greet the babies.
Black, blue, red, cream, Tortie, what will number one cub’s colour be ? The answer appears in a final, purring contraction : lemon yellow !
Eh ?? Yep, lemon yellow.

After a moment of utter bewilderment , I rationalise : The yellow is meconium, the baby must have got stuck for a while, but he’s fine. I clean him up, get him dry, and take a look : The little thing is white ! Not a single mark, not a shadow of colour, no hue whatsoever, he’s white all over, a dazzling white. Except with two coloured parents, that just isn’t possible. This immaculate baby isn’t genetically white. There.
But he IS white – a blinding white. So what, is he a super smoke / silver / shaded ? Or the “forbidden colour” : A Colourpoint ?
I don’t have time to run through the pedigrees though, because here comes his roommate. Are you kidding me ?! White again !!
Although this one is a little less bright than his brother. As a German breeder will put it later on, he’s “coffee with lots and lots of milk”. This baby seems to qualify for the cream-super-smoke-super-light part. Ok, but then what is the first one ?

I’m distracted from my thoughts again with the appearance of number three’s backside : Black ! Yippee, a colour that actually exists !
And the fourth candidate : Tortie ! By the rules, phew.
So here are the results of the day : Four Turkish Angora kittens – two registered and two outsiders.
Time to call a friend and gather the international community’s advice : Off go the pictures to our favorite social network.
The commentaries come flooding in. Let the betting begin : Point or not Point ? For or against the recognition of this colour by the LOOF ? The Colourpoint issue is raised yet again !

The first days go by. Gauguin’s ears – the “coffee with milk” kitten – are turning darker : so he really is a Colourpoint ! Blue ? Seal ? The following weeks will tell. Garfunkel’s ears – the “white” kitten – haven’t changed yet. They’ll turn light red a few days after his brother’s.

● After 2 weeks, the tips are clearly marking : the whole external surface of the ear is now coloured, and the tail is getting darker, revealing a tabby pattern.

● After 3 weeks, a Colourpoint’s paws and nose darken. So why do mine still have a perfectly white nose and immaculate paws, although their thighs are colouring up ? Hey, because they’re bicolour ! Well well, these two fellows are full of surprises.

● After 2 months, Seal’s dark mask is well drawn, while Red’s one is lighter and still only a shadow. No, Red hasn’t put his nose in the bowl ! The red mark on the right side of his nose is the colour of his mask, split by a slightly asymmetric white flame, like his brother’s.

● After 3 months, the colour is well settled and defined ! It will still strengthen during the following months.

Whether one is passionately in favour, or boldly against its recognition in France,
it is a delicate and subtle colour, timid in the first hours of life, but strengthened with time, which dresses our cats with a changing, noble, and precious coat.

Colourpoint : a few words about genetics

The distribution of colour on a cat’s body is determined by the “C” gene.
The wild type “C” allele determines a cat’s coloration in nature, it is dominant and the whole body is coloured.
It is the “cs” allele which is responsible for the “Colourpoint” pattern, characteristic of Siamese, Birman, and other Colourpoints. Pointed kittens are born entirely white, before colouring gradually – starting with the extremities. The eyes are blue.

As Point coloration isn’t currently recognized by the LOOF in France, a genetic test is available to detect it. Several accessible laboratories provide this test.

“Point” coloration results from a malfunction (mutation) in tyrosinase, an enzyme involved in the coloration of cat coats. Tyrosinase functions at body temperature.

Yet in the case of Colourpoints, tyrosinase fails to work at normal body temperatures. The bodily heat inhibits the enzyme, almost stopping the production of colour – the hair stays almost white. But at the extremities – the “points” (nose, ears, “socks”, and tail) -, the temperature is cooler, tyrosinase works, colouring the points.

That is why the colourpoint kitten, who has spent nine weeks in its mother’s hot womb, is born very white and only  colours its “points” as the weeks go by.

(Translated from french by Stefan Eckert) 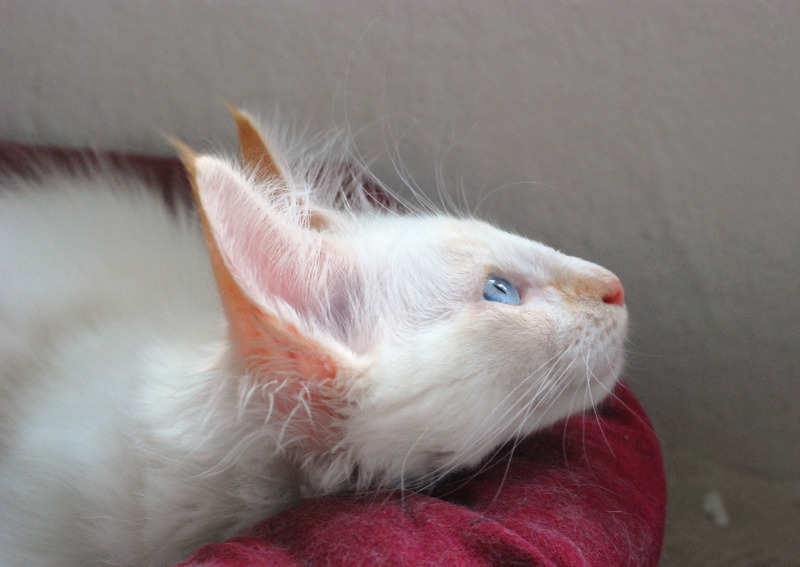